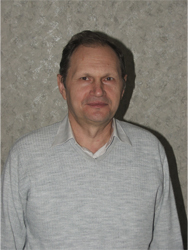 Head of the Department – O.M. Kostiuk

The main scientific activity of the department – a theoretical and practical development of the chemistry of organophosphorus compounds. Key research activity is the synthesis and study of new types of elementoorganic compounds. The aim of the research is to create a basic methodology to obtain phosphorus-containing analogs of natural and bioactive compounds, the design of new types of phosphorus-containing ligands for metal-complex catalysis, reduction to practice in nanotechnology of organophosphorus compounds with useful properties.

One of the fundamental problems of chemical organophosphorus compounds is the development of preparative methods for the synthesis of compounds featuring a carbon-phosphorus bond. Among them, a special place takes functionalized phosphines and their derivatives, for which methods of synthesis are developed in the department. The department also carries out fundamental researches on the development of innovative methods for synthesis of acyclic and heterocyclic compounds bearing C-P and NP bonds. Applied researches of the department are associated with the use of organophosphorus compounds as biologically active agents, complexing agents, catalysts, reagents in organic and element-organic syntheses.

The main scientific and practical achievements of the Department. The department carried out fundamental research on the development of methods for creating carbon-phosphorus bonds,  eleborated original methods of electrophilic phosphorylation of electron-rich unsaturated, aromatic and heterocyclic compounds by phosphorus (III) halides, developed a general approach to phosphorus-containing fused heterocycles, hardly accessible λ5-phosphinines and λ5-azaphosphinines. New ferrocenylphosphines were synthesized and studied as ligands.

New types of ligands based on phosphorylated heterocycles including water-soluble ones were successfully used in palladium catalyzed asymmetric reactions. New classes of organo-phosphorus compounds were used as complexing agents for heavy metals, catalysts for organic synthesis and biologically active substances in agriculture. Systematic research in the field of synthesis and application of organophosphorus compounds, in particular development of promising direction creating nanoscale phosphorus-containing catalysts for cross-coupling reactions and asymmetric synthesis were carried out.