The department was founded (1945) and first headed (till 1972) by the Academician of NASU A.I.Kiprianov. He was followed by the Candidate of Chemical Sciences, Senior Scientific Associate V.M.Zubarovskii (1972 – 1976) and the Doctor of Chemical Sciences, Prof. А.I.Tolmachev (1976 – 2005). Now the department includes 16 scientific associates (4 doctors of sciences and 10 candidates of sciences) and 6 engineers.

Head of Department – Alexander A. Ishchenko, Dr. Sci, Professor, Corresponding Member of the National Acаdemy of Sciences of Ukraine

The main research line of the department. The department is the world leader in the synthesis, study, and development of multifunctional photosensitive materials based on organic dyes, first and foremost, IR absorbers and emitters [1−11]. Polymethine dyes are the main object of study [1−6]. A diversity of synthetic methods have been elaborated to obtain dyes in various ionic states, namely, ionic (cationic [1,4], anionic [1,4,6,12,13], and cation-anionic [14,15]) and internal-ionic compounds (merocyanines [1,4,16,17], ketocyanines [18,19], mesoionic species [20], squaraines [21−24], croconines[21,24,25], and difluoroborate zwitterionic dyes [26−30]).

The most important scientific and practical achievements of the department. Aiming at higher stability of deeply coloured dyes, synthetic routes were developed to introduce bridge groups into the dye chromophore. The new methods were employed to synthesize stable dyes intensely absorbing light at wavelengths longer than 1200 nm [4], which was hitherto believed impossible. Also, the most long-wavelength π-π* absorption of known organics was obtained (1620 nm) [4].

Among the most important discoveries were the spectral deviation of unsymmetrical polymethines and the chromophore interaction in biscyanines [1]. The pioneering studies addressed the spatial structure of cyanines and the effect of the nature of their substituents as well as solvatochromism [1]. The novel classes of ketocyanines and polyones were investigated [18,19]. The dyes noted for their record large electronic asymmetry (with spectral maximum deviations over 500 nm) and Stokes shifts (Fig. 1) were synthesized [31]. The first organic dyes with conjugated cationic and anionic chromophores (Fig. 2) were prepared [32]. 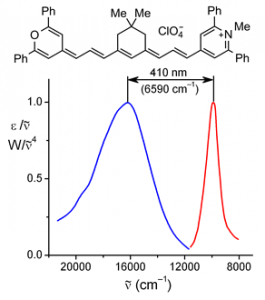 Fig. 1. Absorption and fluorescence spectra of the polymethine dye with a record large Stokes shift (in acetonitrile). 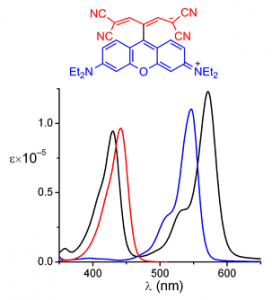 Fig. 2. Absorption spectra of the dye with conjugated cationic and anionic chromophores (see the black curve) and of its components (in ethanol).

Dyes of unusual structure derived from boron dipyrromethene and difluorodioxaborine [26−30] were found to have large two-photon absorption cross-sections and high fluorescence quantum yields at 700-900 nm [33,34]. A novel class of polymethine dyes containing carbocyclic instead of commonly used heterocyclic end groups was obtained and studied spectroscopically [12,13,23,24,35]. The first studies were conducted on the luminescence of polymethines [3,36] and the photonics of their ion pairs [37,38]. The electronic spectral band shapes of polymethine dyes were first analyzed [39,40] thus providing an insight into dye absorption selectivity and its relationship to the molecular structure [3,34,40]. A theoretical basis was developed to treat intermolecular interactions of cyanines in liquid solutions and polymer matrices [41−45]. The regularities which govern dye association including J-aggregation [49−52] were established [3,46−48]. The p-electron distribution in merocyanines was theoretically and experimentally investigated so as to control the dye electronic structure within the range of three ideal states (neutral polyene – polymethine – dipolar polyene) and also to govern the sign of solvatochromism (positive, negative, or inverse) by varying the donor-acceptor properties of end groups, the nature of solvent, and temperature [53−59] (Fig. 3). 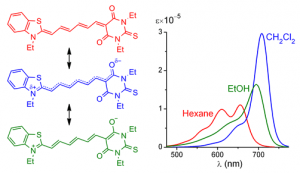 Fig. 3. Absorption spectra of the inverse solvatochromic merocyanine which can exist in any of three ideal states depending on medium polarity.

Juxtaposition of high-level quantum chemical data and a large body of experimental results afforded a qualitatively new understanding of the molecular electronic structure in the ground and excited states and enabled establishment of fundamental relationships between colour and luminescence of polymethines, on the one hand, and their constitution and the nature of the medium (e.g., solvent or polymer matrix), on the other hand. As a result, it became possible to purposefully prepare dyes with desired properties for diverse light-energy conversion applications. Some of the materials developed are mentioned below.

•Dye-based infra-chromatic photographic films [60] having much higher resolution and sensitivity than their analogues (including Kodak Aerographic Film 3432). They enable detection of hidden details behind the haze or under a coating and are employed to explore the earth surface and sea shelves, to assess the quality of cultivated areas and woodlands, and also to produce general- and special-purpose maps. The application of the I-1060B film is illustrated in Fig. 4.

• A new polymer active medium which first provided tunable dye-laser generation with pumping at 1060 nm [63]. The conversion efficiency at wavelengths over 1100 nm amounts to 43% thus comparing well with the best active media for visible lasers. 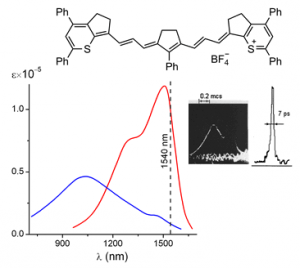 • Dyed-polymer based absorption light filters protecting against laser radiation of 1060 nm wavelength [70]. They attenuate radiation by 4-6 orders of magnitude (as required), with 40−90% visual transmission, and can operate at any radiation incidence angle, in contrast to interference light filters.

• Dyes exhibiting a dramatic increase/decrease in dipole moment upon electronic excitation. A number of such compounds have been found to have pronounced nonlinear optical properties [33,34,71−74].

• New holographic recording media based on a dye-doped photothermoplastic polymer which are applied for nondestructive metal quality control [75,76]. Unlike many analogous materials, they need no photoprotection during latent image formation and can therefore be used under field conditions.

• Photovoltaic systems with the photosensitivityaround 700 nm (where the maximum solar photon flux occurs) employed in the fabrication of solar cells [77−79].

• Dyes for the compositions photopolymerized with a semiconductor laser (λem = 405, 650, 780, 830, 860, and 980 nm). A hitherto unknown effect of organic dyes has been revealed: Polymethine dyes initiate/inhibit methyl methacrylate thermal polymerization in the absence of a standard initiator [80].

• New selective chemosensors and labels for cations [85] and anions [86] derived from pyridine-2,6-dicarboxamides. Starting from them, a new receptor-ionophore system has been developed which contains multiple coordination centers in the molecule. Co2+, Zn2+, and Ni2+ ions complex with the pyridine moiety to cause a bathochromic absorption shift, whereas Pb2+, Hg2+, Cd2+,Mg2+, and Ca2+ ions form an aza-crown complex accompanied by a hypsochromic shift (Fig. 7). 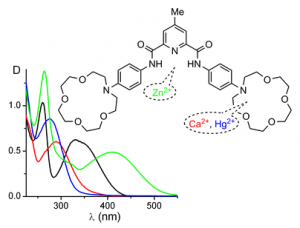 Fig. 7. Absorption spectra of the free and ion-bound (in the presence of Zn2+, Ca2+, and Hg2+ salts) ionophore.

•Dioxaborine dyes showing much promise as efficient luminescent indicators of primary and secondary aliphatic amines (Fig. 8), with a lower detection limit down to 1 µМ (1 ppm). As compared to Indophenol Blue, a well-known ammonia indicator, the dyes concerned are close in sensitivity being, moreover, much more time-saving, having a wider action range, and needing no special chemicals. They can be employed for ecological control in the amine industry. 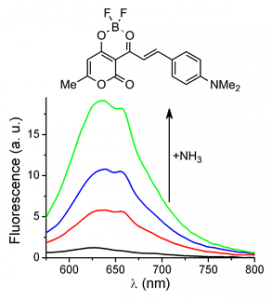 13. I. V. Kurdyukova, N. A. Derevyanko, A. A. Ishchenko, and D. D. Mysyk. Symmetric anionic polymethine dyes derived from fluorene and its derivatives with electron-acceptor substituents: synthesis and spectral properties. – Russian Chemical Bulletin. – 2012. – Vol. 61, No.2. – P.287-297.